Bob and i agreed to meet at the coffee pot saturday morning before the rest of the house was away. Late Friday night Eric caught word of this plan and signed on. The weather the prior few days had been rainy and windy but there was suppose to be a break in the clouds Saturday morning. Upon rising I walked over to the bay to see if the wind had calmed down. It had..lot an extent. Bob and I both thought the same thing, ‘good enough’. We geared up and headed to the marina. The course was set to round the ruins and anchor up on the north side of gardeners island. There we would be able to get some porgies for bait after 30 minutes of chumming and lines in the water, we had nothing. The porgies werent biting the squid. We were ready to pack it in and head to the gut to jig when bob had the second most notable phrhead to the nort Bob pulled in a nice 34 inch bass on the back end of flood tide in plum’s gut. We were catching monster blue fish jigging diamonds off the bottom. On our ‘let’s just do one more drift’ pass we got this bass with live lined Porgy. Eric was on the net and didn’t let us down. 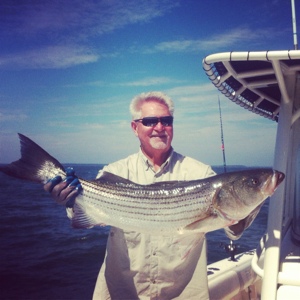