While in Dallas for work, I also scheduled a hog hunting adventure.  One of the guys we do business with down there is a hunter and has some experience and I have been looking for an opportunity to experience harvesting my own meat.  It isn’t from a place of blood thirst or cruelty but quiet the opposite.  Its a comes from a place of trying to tap into the reality of life and the reality of taking life.  We are very disconnected from our food and while society has advanced to afford us that, we have to acknowledge that we all came hunters and even a few generations ago our Great Grand Parents grew up where at the extreme they hunted deer and killed chickens for meat while in the least, bought whole animals or worked with a butcher who was delivered whole animals.  Today we get segmented shrink-wrapped cuts of meat often pre marinated – and that is those of us who still cook!!

We met up at the lodge of DryCreek Outfitters outside of Wichita Falls TX.  The hog population is completely out of control and there are very few limits on hunting them.  The hogs have the same genetics as domestic pigs but a few generations back they got loose and went feral.  They eat the crops, tear up the fields, and reproduce like crazy.  At 6 months they can have their first litter of 8-10 and they are capable of having litters every 3 months.  2 pigs turn into 40 real quick.  They also have no natural predator. All of this lines up for friendly hunting conditions, however the pigs are very smart and way faster then you would think.  We would be hunting at night with ‘modern sporting rifles’ outfitted with thermo-optics.  I was concerned that this would make it completely unfair but it turned out to be extremely difficult.  We covered 150 miles in the car scoping for hogs.  Once we located one, we would get out and begin stalking, across wheat fields, in the total dark, hoping to get within 200 yards.  We then had to make a free standing shot at a grazing hog.  Once that first shot went off, all follow up shots were at a hog running all out.  They are fast.  At 150 years you would have to lead them by about a body length. This was if you could fight the recoil and keep the target in the thermo scope.  The first four we spotted over a 3 hour period were all lone boars and all got away. After a quick pep talk tanner our guide called bill and I out to the field.  It would be a long stalk.  In single file line we navigated the barbed wire fence, carefully handing the rifles over and then proceeding.  Tanner lead the stalk and Bill and I were essentially blind behind him with no night vision.  It turns out, the hog was quartering away from us at a decent clip and were were playing catch-up/cut off.  At 150 yards Tanner made the call to fan out and get the cross hairs on him.  Bill and I both fired and missed,  Fortunately I was able to keep him in my scope and track him left to right with follow up shots.  He dropped.  It went from extreme audible chaos to nothing but hearing your deep breath in your head, inhaling and exhaling interrupted only by the thump of your heart.  As we walked up on the pig, I wasn’t sure what to expect.  Once I got a look, I realized it was huge, and vicious, and my shot, by pure luck, was 2 inches back from its eyes.  Couldn’t have been better placed, it dropped instantly.  In jest, I would argue that its more accurate to say the Boar ran into my bullet as opposed to me having had shot it.  After a few pictures we dragged it out of the field and back to the truck.  People ask “How did it feel killing something?” and I certainly thought about that well in advance of this trip, I also questioned how I would act, at that moment.  I think my answer is that committing to willfully kill something was far more of a journey.  Once you get to the moment the hog drops, its not shocking.  The first shot I took at the first hog was far more terrifying.  Booking the trip was more terrifying.  Getting in the truck to head for the fields was more terrifying. I think the journey to that ultimate moment, the first pull of the trigger and missing, and ultimately pulling the trigger and succeeding, is really just a path of stripping way all the intermediaries we have grown comfortable with.  It was liberating.  There is no doubt that a lot of animals have died on my behalf prior to this hunt, it is surprisingly peaceful, that at least in this case, I weighted the consequences, did the work, and reaped the benefit of meat I have grown so accustom to having, sometimes with a click of my cell phone.  Thats my long answer, my short answer “It felt significant, just as it should.” 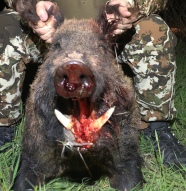